The Significance of Color in Byzantine Iconography

Every aspect of writing an icon in a ritual infused with meaning.  Not the east of this is the choice in paint/pigment color.  As I have mentioned earlier the red bole applied before gilding represents the earth and man; the gold God's breath and Divine Light.

Often those represented in icons are shown wearing specific color; Mary, Christ's mother often in blue, Christ in red.  The significance of this is not to be overlooked; instead it is to read by the viewer.

The following are list of colors and their significance in Byzantine Iconography:

PURPLE: Often a color of royalty, as purple is a hard to acquire color, this color also represents the Kingdom of God.

RED: Used to represent humanity; Christ is shown in red as a reminder of his human nature. Red also symbolized blood, and earth.


WHITE: Typically represents purity and divinity.  It is seen on angels, babies, and the shroud of the dead.  Christ after is death is shown in white as well.

GREEN: Reprsents the earth, youth, and hope.  The Archangel Gabriel in the icon I chose is seen wearing pale green which I believe represents the hope of the messages he delivers. 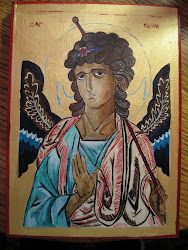